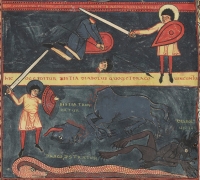 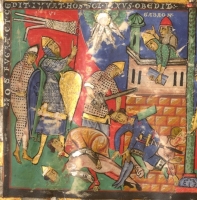 Characteristics
What are the differences from the first version:
It still is a simple, battle sword with brazil-nut pommel. A sword of the Norman warrior and there is nothing special to stand out. I kept the original design and type of the sword which I create 2 years ago. But now I tried to make the sword a bit lighter, better balanced, more stiff. The blade has a slightly different form with a narrow fuller, but the overall length and width parameters are almost identical.
The sword was intended not to be a sword only for the rider, but a more universal, convenient and powerful weapon in close combat but of course, it will also work well as a weapon for a horseman.
Grip color and shape is also different in this version, now is very dark and worn brown with one riser in the middle.

The name Bohemond
The name of this sword comes from Bohemond I. He was a leader of the First Crusade, which was governed by a committee of nobles. Also, Bohemond I was the Prince of Taranto from 1089 to 1111 and the Prince of Antioch from 1098 to 1111.

(The Emperor Alexios (1082-1085) daughter, Anna Comnena, leaves a portrait of him in her 'Alexiad'. She met him for the first time when she was fourteen and was seemingly fascinated by him, leaving no similar portrait of any other Crusader prince. Of Bohemond, she wrote:
'Now the man was such as, to put it briefly, had never before been seen in the land of the Romans, be he either of the barbarians or of the Greeks (for he was a marvel for the eyes to behold, and his reputation was terrifying). Let me describe the barbarian's appearance more particularly – he was so tall in stature that he overtopped the tallest by nearly one cubit, narrow in the waist and loins, with broad shoulders and a deep chest and powerful arms. And in the whole build of the body he was neither too slender nor overweighted with flesh, but perfectly proportioned and, one might say, built in conformity with the canon of Polycleitus... His skin all over his body was very white, and in his face the white was tempered with red. His hair was yellowish, but did not hang down to his waist like that of the other barbarians; for the man was not inordinately vain of his hair, but had it cut short to the ears. Whether his beard was reddish, or any other colour I cannot say, for the razor had passed over it very closely and left a surface smoother than chalk... His blue eyes indicated both a high spirit and dignity; and his nose and nostrils breathed in the air freely; his chest corresponded to his nostrils and by his nostrils...the breadth of his chest. For by his nostrils nature had given free passage for the high spirit which bubbled up from his heart. A certain charm hung about this man but was partly marred by a general air of the horrible... He was so made in mind and body that both courage and passion reared their crests within him and both inclined to war. His wit was manifold and crafty and able to find a way of escape in every emergency. In conversation he was well informed, and the answers he gave were quite irrefutable. This man who was of such a size and such a character was inferior to the Emperor alone in fortune and eloquence and in other gifts of nature.')