This is an interesting type of bladed weapon - light and short, strong and stiff blade with sharp point. Handle is quite tight and the pommel needs to get used to. I have decided to make the grip as classic 13/14th century style, with neutral color of a leather. The balance is close enough for quick movement, but also enough forward to provide strong impact and cutting. Actually, after some try and testing, I would compare it with modern machete. Short length is good to fight in a short distance, with a shield in a second hand. The pommel decoration can suggest that this particular example was designed for a left-handed person: the castle on the pommel obverse side will be visible only when wearing on right hip. But some medieval manuscripts reveals different technique of wearing this type of weapon: sharp edge upward. We don`t know exactly and can only guess a maker (and owner) intention at this case.

This falchion is dated in most sources to around 1400. However, the form and style of blade are characteristic of those around the middle of the 13th century and at the very latest, the beginning of the 14th Century. According to the Elmslie Typology, published in 2015 and which classifies medieval single-edged arms, this falchion would be categorised as a Type F1a, the earliest form of blade profile.

The original falchion has little shorter grip (circa 10mm). The blade is bent and corroded and it is quite difficult to make exact reconstruction. Originally the back edge was probably straight and my falchion is slightly curved on this side. Also, the widest part of the blade could be different with more visible angles. There is a few more small differences, also about the pommel, which I will fix with a second version. This work gave me a lot of experience about this unique type of weapon. 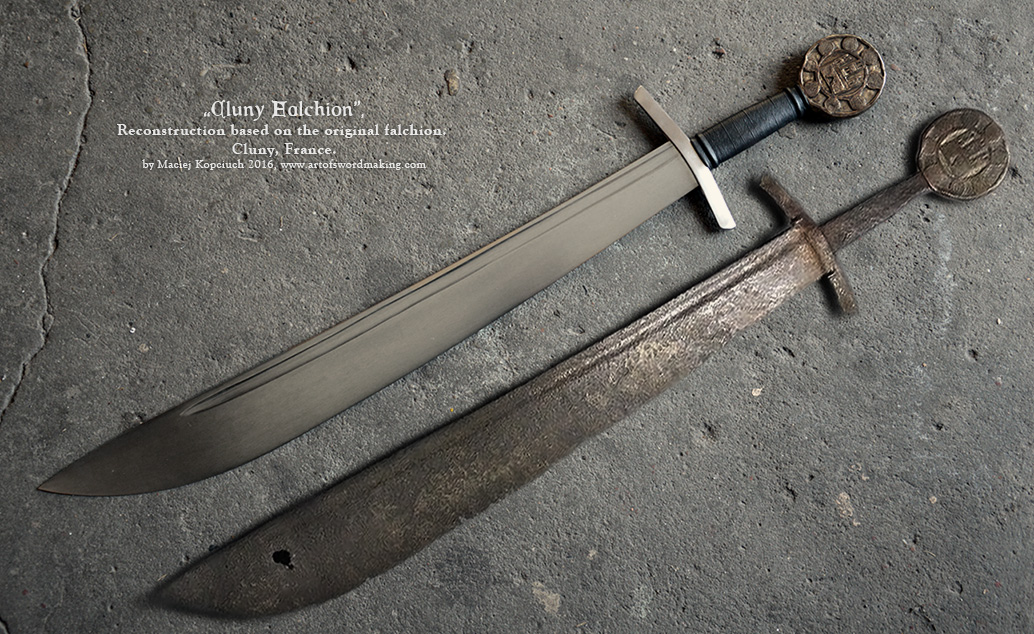