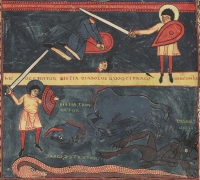 One handed sword dated to first half of 11th century.
This sword is based on original sword from Croatian History Museum in Zagreb.

That sword has special - but not rare - parameters. Original one is only around 900g, without handle and some looses caused by corrossion. My sword is also very light with new grip (1040g) and this length (1030mm) as for one-handed weapon. However this one original represents a large group of swords from his period (between 950 and 1050). It has also short grip (circa 85mm), which originally is even a bit shorter than my version (90mm).

Blade
Blade is wide, long (as some longsword have) and narrowing just a little - but also is not exactly straight on the most of its lenght. It has slightly curved edges - as most of this type examples also have. That is an important feature too.

Crossguard
The crossguard is thin and long (232mm), as some other of his group (for example sword found in Cedynia, Poland - very similar to that one with all parameters).

Pommel
Also the pommel is very small, especially comparing with long crossguard and huge blade. That makes a point of balance placed more forward, despite the blade weight and thickness (from 4,5mm to 1,5mm). However, considering total weight of this sword, it feels very comfortable and makes handling convenient.

Conclusions and thoughts
Considering this sword design, proportions and measurements this sword would be best for horseman / cavalry, but using it on the ground will be also effective because of its long range and weight. I don`t think this type of sword was designed for all of the nuances of sophisticated fencing techniques (in our modern sense), but rather for quick attack and wide cutting with special techniques against light-armoured enemies (leather, chainmail, etc). Long crossguard and pommel can be used as a secondary weapons for close-distance combat. We should also notice that this type of swords was always used always with large shield and this can tell as more about 11th century tactic on the battlefield.

Inscriptions
Original sword has inscriptions / marks on the blade but they are not clear and vestigial today. That means they can not be recreated correctly.

According to historical sources I choosed style of belting depicted many times in 11th/12th century art. For the scabbard decorations I used some of Norman Romanesque Art motifs and Crusader-style crosses (five crosses may reflects also 'Jerusalem Cross' and means: five wounds of Christ or five kingdoms in Holy Land)