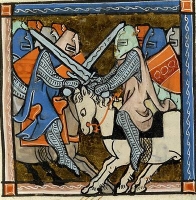 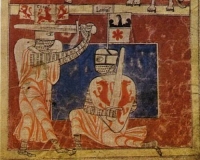 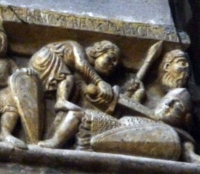 It is worth to notice something about the length 1050-1090mm swords.

Once I was making a research from some few old catalogs published in Poland, where was over 500 examples of swords from European museums (mostly central and eastern Eur. thanks to Polish prof. Marian Głosek), incl. general measurements. All of them dated between 11th and 15th century. I made a labels and put all these swords data in many variations.
For example: I put every sword`s Total Length on the measure with mm wanted to find most common length for each type / period, etc. And then one thing immediately caught my attention: plenty of my marks was placed at range 1050-1090mm...
I checked what swords type they are, what period, what proportions.
The earliest swords in this group are dated to early 13th century, around 1200-1210 and are present in manuscripts to the end of this century and later. It seems that we can say the whole 13th century they were used in this simple form and with these parameters.

What is about that length?
Apparently, in late 13th century, medieval knights needed a different sword. General look of the sword parts and types reveals nothing new, but the proportions are different. Grip length became a bit longer, for 1/3 roughly - now between 125 and 165mm, for the most of these. This allows you to place second hand half on the grip and half on the pommel. Notice both hands are close here, touching each other.
Also, length of the blade is just a bit longer. In fact, that would be the same extension range as about the grip: means some 30-60mm, roughly.   So, they added same extention range to both, roughly.

Is that a longsword, already?
Well, not yet. It is not designed to be a longsword with its fencing techniques and proportions, but simply to be able to keep it with both hands if you need more:
- control,
- range,
- speed,
- force, etc.
However, it is the precursor of longsword, its ancestor, so-called by me: an 'Early Longsword', and now you can fight with one hand or both hands. This, in time, will lead us directly to ... fencing techniques of the longswords.
This is very important moment of evolution. All later longswords are succesors of this idea.
Some will say now: 'Ok, let's treat it as a transitional stage'. No. This amount of examples of almost exactly the same length means it was not 'a try' but very good, versatile, functional and needed solution. This design became popular more and more to finally, with plenty variations, turned into classic longswords of well known types.

... and now you can know how numerous and extensive is that group of swords. Also, how important they are.