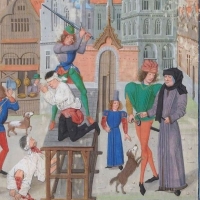 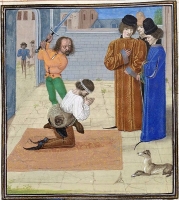 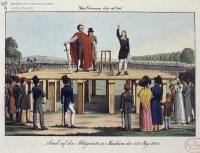 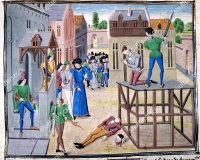 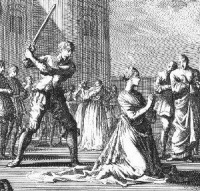 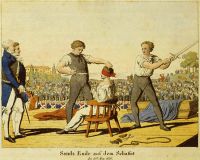 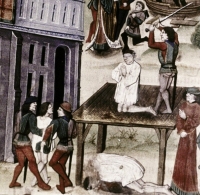 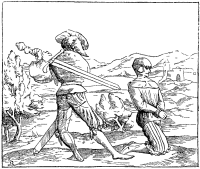 As you well know, my specialization is battle swords from the 10-15th century. However, like many of us, I believe there is a gloomy testimony to history in executioner's swords (and they are definitely swords!). That is why they are an interesting tool of an executioner and often a beautiful work of craftsmanship.

Executions-decapitations with a sword or other blade have a long history. Just like the office, law and profession of executioner were created for this purpose, almost all over the world. However, in Renaissance Europe, a special kind of sword was invented and created and has been in common use for almost 3 centuries...

What were the main features of executioner swords?

Typical European executioner swords were 100–110 cm long, and the length of the double-edged blade ranged from 80 to 90 cm. They differed from combat swords by a significantly greater width (sometimes up to 70 mm) and often along their entire length: such swords do not narrow towards the point they do not have - their tips are generally blunt, straight or semicircular, as they have never been used for thrusting. The fuller, if present, was usually short. It also resulted in the fact that the weight of the executioner sword is usually greater (usually between 1.5 and 2 kg) than the corresponding length of the combat sword, despite the fact that the blade was generally thinner in cross-section and have almost no distal taper. Such proportions of the blade meant that the center of gravity of the katowski sword was about 1/3 from the end of the blade, while the swords intended for combat had the center of gravity closer to the hilt.

The heads of executioners' swords were usually small and not very decorative, in a spherical or tulip-shaped form, often made of brass. The handle, 17 to 22 cm long, was about 1/5 of the whole and was intended for gripping with both hands. Cladding generally of wood, sometimes braided with wire; straight crossguards, very rarely supplemented with additional elements protecting the hand.

Executioner`s swords were usually simple and functional, but there are also richly decorated, high-quality items. The most common decorations were religious inscriptions referring to justice or related to the owner of the sword (for example, a city or a court); Coats of arms placed on the blades are of a similar nature. Among other decorations, there are symbols of administering justice (instruments of torture, executions or entire scenes of execution of sentences); Christian motifs, such as the cross, baby or saints (for example, St George), as well as Old Testament figures such as Judith with the head of Holofernes, as well as signs of manufacturers, for example, from Passau or Solingen. Many swords have 2-4 small holes at the end of the blade, with an unclear function (it has been suggested, among others, to drain blood, hook for hanging a sword or religious symbolism).

Execution with a sword

Correct execution with a sword required considerable skill and constituted the so-called 'master test' - confirmation of the skills of a guild master. The executioner should have separated the head with one clean cut, without injuring other parts of the body (a wrongly aimed blow could easily hit the shoulder). Often the inexperienced or inexperienced executioner needed a few cuts. Passing the exam was confirmed by a special document. The sword may have been owned by the executioner, but was often owned by the city or the court; Documents certify that some cities had more than a dozen swords (for example, in 1567 Poznań, Poland, had 12 swords, and in 1626 it already had 15).

You should also be aware that today you can often find counterfeit swords of various kinds, including the executioner ones. Due to their nature and ornamentation, they are very often counterfeit and it is sometimes difficult to distinguish these products from the originals. Each such item should undergo specialist expertise before the planned purchase.