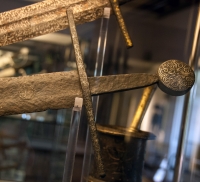 How to recognize fake swords, which they pretend to be original?
Some points and thouths about fake 'old' swords.

People often ask: 'How do you know they are fake?' And it is not possible to answer shortly. I could say simply: Because I know original swords. But that's not enough, everyone can say that. In some cases, I think a lot of people would like to believe in authenticity, because like it so much. But it doesn't work that way...

To answer this question, we need to consider why such swords are made at all.
It seems that genuine swords are such a rare and unique finds, searched by archaeologists national treasures, and at the same time so attractive and desirable by collectors that it is simply tempting to make them today, age them and then sell them as originals. Because: who would not want to have a real Viking sword at home?
I am omitting the obvious fact that this is simply cheating, against the law and morality.
I feel sorry for the good craftsmen who make these swords, sometimes very good artists whose names we will never know. It is very sad that they were used for this dirty game, deprived of their creative personality and the opportunity to present their art in public. Some of those fake swords are pretty well made. The more it is a pity that we will never meet their creators to tell them: 'Good work!'.
Perhaps the only option would be not to buy any questionable items, but leave them to the researchers' judgment first. Temptation, however, sometimes wins with common sense.

What you need to pay attention to, when you see an old sword whose authenticity you are not sure?

1. Typological correctness.
It is the fastest method that requires knowledge of original swords, typology, scientific studies, and historical sources. Allows you to define the authenticity or to undermine it in the very first moments, for the most cases. That also includes correct attachement of parts of the sword, their position and geometry.

2. Surface condition.
It can be recognized whether the patina, damages and traces of corrosion are truly old, formed over hundreds of years, or formed quickly in a short period of time artificially, with the use of such agents as: acids, patinas, other chemical processes.

3. Style of decorations, inscriptions, add-ons.
Compare them with those on the original swords, check catalogs and photos from museums, books, etc. have professional opinions, if you can.

4. Production quality.
In many cases, we find fakes made from scratch with the intention that they will be shown as antiquities. It is possible to recognize such an idea, for example, on the basis of the quality of precision or the geometry of the elements. While the original swords were made with precision and bear traces of past use, in modern fakes such traces are given on purpose during the manufacturing process. An old, precision-made item that is damaged looks different, and a new, aged item looks different. It is difficult to counterfeit but requires a skilled eye to recognize it.

When we see a sword that is said to be old, we need an appropriate description, including:
its history, description of the place of finding, finder, country and geographic area, confirmation of authenticity and origin, exact dimensions, including weight, which is a very important parameter.

At the same time, in many cases, we must realize that it will not be possible to unequivocally state whether it is an original without serious research. Therefore, it is very tempting for buyers and sellers of such a swords to pass from hand to hand without additional research and analysis. They ignore the opinions of experts, they know that it is impossible to quickly examine the age of the metal, while counting on the naivety of potential customers.

Well, this is a very broad topic and the only way to avoid being cheated is to deepen your knowledge, be aware of what you are buying and what features it should have. Belief in the authenticity or just a description of an item is not enough to consider it as genuine. Note that even experts and professionals often have doubts. So, never make hasty decisions. Try to get opinions, advice, check all the information before buying any antiques, not after.

'Medieval swords' made in 19th century
There is another type of swords that was produced in the 19th century, intended to copy the style of the swords several centuries older. They were ordered to decorate castles and palaces, as such a style was fashionable and desirable at the time. Many of these swords later ended up in auction houses and were described as being medieval or reenessaince weapon. They are interesting pieces, often very well made. However, their value should be less than that of the real medieval ones. The question remains: should we treat them as fakes? I think not, because they were made intentionally as an element of interior design and nobody tried to deceive anyone when they were created. They are already old and are an important example of old craftsmanship.
We should recognize and name them according to what they are: 19th century swords, imitating medieval swords and determine their value on the basis of age, quality of workmanship and state of preservation.