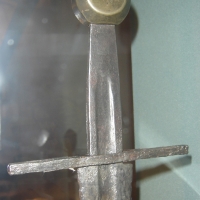 Fullers on the tang

Almost all of medieval swords, those with fullers, have running it on the tangs. We know also some few swords with fullers starting under the crossguards, but that`s just a few examples. It is clear that making the fuller starting on the tang was a standard method, a kind of a rule.
But actually why? For what reason?

That question many times is repeated and it seems that no clear answer was given. Let`s try to fix that :)

SOME MODERN THEORIES AND IDEAS
Let's look at some often heard hypotheses first:

Theory 1) The ability to reduce the weight of the sword by removing material from a part of the tang.
Clarification: That`s how modern way of thinking works, 'grinding means stock removal, so that`s why it was made this way'. Wrong. It would be very small part in weight, some few grams, and it does not make sense to remove it here at this point. It's simply a lot of work in such a critical area of the blade for such a small effect.

Theory 2) The possibility of hammering the crossguard into the cavity on the tang to stabilize it.
Clarification: Yes, in this case we can observe this effect on some swords in museums and it seems that this method was actually used. However, this is still only a group of swords from the early period, with thin crossguards, and it may be as well the result of later repairs or deformations caused by the weakening of the thin sides of the crossguard. This may be a secondary and additional option, not the main reason to to design a special area.

Theory 3) The possibility of locking the wooden handle into the slots, between crossguard and tang.
Clarification: We have relatively a lot of preserved wooden parts of the handle in relation to the number of swords, from the 10th to 15th century. Most of them do not have these elements mounted in such a way, just a few cases where we can try to claim that method was actually used. However, it was not possible to draw a fully scientific conclusion that this method of wedging wooden grip was a reason to leave the gap in this place.

All of the above theories can be true and fulfill additional functions, of course. But this does not give a full answer because this element, this area, is too important for the construction of the entire sword.

THE HISTORY
To answer this question, we must be aware of the construction and function of the sword and understand its evolution throughout history. Even then, the function of this detail must be considered in several ways.
Blades with fullers, in a classic form and type as we would clasify today, appeared in 7th-8th century and in 9th-10th century have already become the standard types. Swords were made then of mixed steel, forged together for better properties and durability. This process was difficult and demanding and the material was still hardly available.
Fuller, which at the time was quite wide and almost flat, gave the possibility of thickening the steel structure by forging. On the blades of that period we see clear boundaries between the mixed steel structure and fuller. This observation should already lead us to some conclusions.
Also, tangs of these blades are often narrow, short and thin. Not much visible wide and flat fuller on it, even if it goes on the tang somehow. Fuller is not so clear on tang there and probably it is not much important detail of construction of the tang, but important for the blade.
However, later the method of obtaining steel and the availability of this material is changing.
Since 11th century more swords are being produced of ever better quality without having to mix different steels kinds (that's another story).
Please note that shape, width and depth of the fuller also change. Tang became more thick, wide and solid. Fuller became deeper and clearly visible, goes higher on the tang.
The place where the wide blade tapers and goes into the handle is probably the most important area of the entire blade, It is the thickest place and it is there, where the strongest stress occurs.
What principle remains valid: the sword blade is a separate part, not integrated with a crossguard and pommel. That also gives us important tips for the correct answer.
In addition, let's remember in what kind of swords the fuller always ends before the cross: executioner's swords. They were not intended for parrying, cutting, bouncing other blades, hitting armor and shields. They were not exposed to stress like this, or bending during battle. These are swords not intended for combat. But many of later blades after 1500 also have fuller end still on the blade. The reason for this is the changing types and purpose of the blades. They are designed more for thrusting, their cross-section is much thicker and angular, than flat for cutting. They just don't need fuller anymore, at least not in a structural sense (in fact, when considering some Eastern-type sabers, you can assume that the goal is also to reduce weight, but then the whole blade works completely differently, with a different stress distribution). In other types there is a ricasso there, so the fuller must end under it, because of the possibility of different handling as well. All this just confirms the following conclusions below.

THE ANSWER
This short section of the blade cannot be considered as something separated, but only as a full length fuller, part of the whole construction of the blade and the sword.
Fuller, which starts already on the tang, makes the whole blade become an integrated and solid in its geometric structure. In fact, from a construction point of view, it is the connector between the two areas of the blade. In addition, the cross-section in which we have cavities and elevations, is the best way to increase strength in this area, especially when it is done by forging. Thick tang receives then more variables for its rectangular cross-section, which, as we know, can significantly add strength to materials exposed to stress and shocks.
We can't recreate the way of thinking and designing of people from those times, but it seems reasonable that over time they began to use technical solutions that improve the strength and durability of their products.
The entire sword is subject to vibrations, which is transferred to the crossguard, pommel and hilt. We feel them on our hands. However, most of them are neutralized by the specific construction of the sword. The fuller area under the crossguard also plays a part in this process. It makes a gap, where vibrations and stresses can discharge, stop moving them further. Basically it is 'silencing' vibrations in this most important place.
All these are matters that we cannot see with the naked eye, which is why the question is repeated so often: What is that for? and sensible answers are rarely given. Because we would like to have an answer that can be shown.

Thus, however, the question arises: will ending fuller before crossguard change anything what we can check and evaluate? Well for sure. But, this will not be easy to find out without testing the sword in real battle conditions. In fact, the best solution, both for producers and users today, will be to trust medieval craftsmen and warriors. They really knew what they were doing.