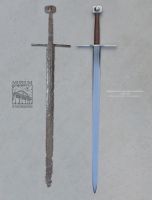 AUTHOR'S NOTE regarding reconstruction of the sword from Modryn, Poland - for the museum in Hrubieszow.

Typology, dating and origin
Modryn sword can be described as Oakeshott types: blade XIIIa (double fuller version), crossguard 1 (with a bulge in the middle like in type 2), pommel K1.
Dating - determined on the basis of available historical sources, scientific studies and analogous swords - can be determined for the years 1350-1380 with an indication of the possibility of the blade`s origin from the period 1300-1380.
The original has a smith sign stamped on the tang. It is a convex cross in the concave field of the shield. The general character of the sword may indicate the origin of the German, Polish or Hungarian workshops.

Sword type and general characteristics
The sword can be included in the group of 'longswords', also known as 'great swords', certainly designed and made for a fight with both hands placed quite close together. The blade type and grip length for hands placed close to each other - these are features that suggest fate more for cutting than thrusting, while a characteristic hexagonal cross-section with reinforced edges and general parameters may also indicate mainly fights with armored opponent.

Blade
The blade has features of slightly earlier types through almost parallel side contours and length. On the other hand, double shallow fullers running for almost half of the blade, we meet in several similar swords, the earliest and dated around 1250-1280. The most similar in size and type to the sword from Modryn is certainly the one from the Burell Collection in Glasgow (private). This sword was in fact used as an analogy in my work on the blade for the Modryn sword, due to the slightly better preserved surface and almost identical dimensions (total length 124cm, blade 98cm, handle 20cm, weight 1800g). The sword was also helpful with reconstructing the missing part of the tip and the length of the blade.

Pommel
In the context of the pommel, from a typological point of view, similar examples appear around 1270 and still were used after 1400, although on a different type of swords. Analogous examples are dated to the first half of the 14th century.

Crossguard
A simple, characteristic crossguard is one of the most popular types from the 11th to the 14th century. The only guideline for determining of a dating more precisely would be the bilateral bulge in the central part, more characteristic for swords from the fourteenth century.

Weight
The current weight of the preserved find is about 1300g. The weight of the reconstruction is 1640g and is  in the weight range of analogical swords. The difference is by adding the missing tip (about 45mm, adding the full grip with wood and leather and also because of the significant loss of steel on the corroded surface and edges of the original.

Balance
An important feature from the user's point of view is the balance and distribution of vibrations and stresses. After recreating all dimensions, thickness and distal taper, the balance of the reconstructed sword is now 145mm from the guard. For a two-handed sword intended mainly for strong breaking cuts, this is correct balance, combined with good stiffness-and-flexibility ratio. It should be noted that the 'great swords' from the first half of the 14th century were balanced differently than the later types (for example: type XVa or XVIIIa characteristic for the fifteenth century were balanced somewhat closer to the guard). Both the shape of the blade, its cross-sections and balance were adapted to the armor type and fencing tactics. This is also an important clue for dating, which therefore can not be later than around 1380.