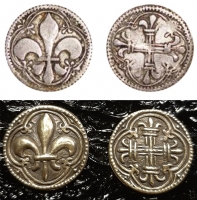 We all know it very well Joanna's most famous sword, the one from Fiebrois, which she described during the trial, the one with the five crosses. However it was not her only sword.

She also had a sword, given at Vaucouleurs by Sir Robert de Baudricourt, and another one she had taken from a Burgundian soldier.
This project refers to Joanna's third sword, which she most likely used in combat. It is also the only sword shown in the only image of Joan from the period in which she lived.
It is therefore a one-handed sword, Oakeshott type XV, typical of this period and the region.
I have added pommel inserts to it to emphasize the belonging and special character of this sword. The pommel inserts are inspired by the French coin from Joan's period, royal heraldry includes a lily and a cross.

It is a sword with the dimensions of a one-handed sword typical of that period. Light, balanced close to the crossguard, broad and pointed blade, hollow ground cross section, stiff.

According to the original concept, the sword was finished as used and bearing traces of both traditional workmanship, use and sharpening, similar to what we see on many originals in museums. The intention was to make the sword unique and realistic.