Sword of King Richard the Lionheart (Richard Coeur de Lion, 8 September 1157 – 6 April 1199), based mostly on his own seal and historical sources (and custom suggestions of my client).
This is a sword in norman type from 12th century, with brazil-nut shaped pommel, wide blade and simple, functional scabbard and belt.
Pure black scabbard and white belt, are based on manuscript and sculptures historical sources and some existing remains of scabbards.
This is a big sword, rather for the rider, in my opinion. This blade type is rare, but we know some very similar examples that makes it realistic and close to the seal sword design. Actually the point was to be as close as possible to the only source connected directly with Richard - his seal. It was very hard to transpose a small symbolic sword shape to the real sword. Especially when we realize that some artists manner can changing the proportions in art... That why this design needed a deeper research on period swords, norman swords, king`s personality and many other aspects to find the best type and parameters.
The result of this work you can see on the photos...

'... I received the sword. Nice work! It's a beast in hand, but you have done an incredibly skillful job in keeping the blade well-balanced, especially the base of the blade is actually wider than my other monster sword, the Tritonia.
I was also pleased to note it is quite similar, visually, to the swords in Hortus Deliciarum: http://manuscriptminiatures.com/…/manus…/original/364-10.jpg

Original seal of Richard I: 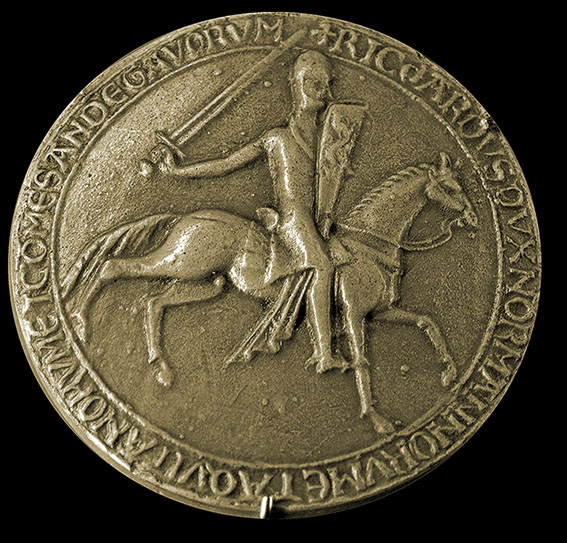