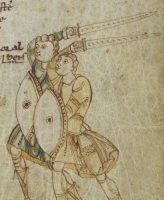 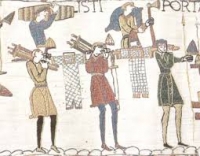 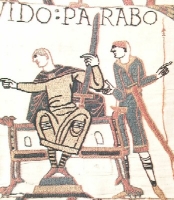 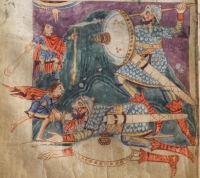 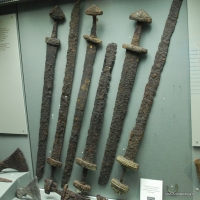 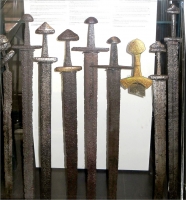 There is an unjustified opinion today that in Europe, during the early Middle Ages, very little or no swords were used. I read in many places that the sword was a ceremonial, symbolic, rare, decorative weapon and not very effective on the battlefields...

Manuscript illustrations, sculptures and records are a very useful and reliable source in answering this question. They show that both spears, axes and swords were highly valued. In the illustrations in the manuscripts, we see all these weapons, by no means as only a symbolic attribute, but we see them in practical use. In the appendix you will find a lot of selected examples showing swords in sources from the period 800-1030.

It is important to realize that swords were much more difficult and demanding to manufacture, which may have made them an exclusive, sophisticated weapon, probably intended for high-status warriors in the early Middle Ages. It was much easier and faster to make a spear, club, hammer or ax. They are largely made of wood and the steel elements are small and do not require as much specialized processing as a sword blade.

For example, during archaeological excavations in Lake Lednickie and Giecz in Poland were found: over 140 axes, about 60 spears, arrows, scabbard chape, plenty of other artifacts and only 11 swords. Dating: late 9th to early 11th century. This shows the proportions of the quantity, but also the undeniable presence of swords.

Certainly, however, later on, from the 11th century onwards, swords are becoming more and more common. This is related to the development of steel production technology and the need for a good, durable and versatile weapon. As a result, the number of swords has been increasing since the 12th century. Due to the lack of ornaments, production is even faster.

In fact, it is surprising that someone can claim that there were very few swords produced then and their effectiveness in combat was low. We know, for example, the ULFBERHT or INGELRII swords groups from that period, which are famous for their excellent craftsmanship, high-quality decorations and efficiency.

Especially in eastern Europe today, you can meet the view that the swords of the early Middle Ages were not very effective, and axes and spears were better. While they are simply different types of weapons, with a different purpose, a different range, for a different combat tactic.

It seems that such a misconception is the result of modern versions of swords for reenactors, which are in many cases made incorrectly: swords are too short, have a balance too close to the guard and that cause the cuts do not have a force, they are too narrow, too light, they do not reflect the features of the original swords from this era.

All the so-called Viking, Slavic, early swords were widely produced and used in 9th and 10th centuries. Although the production technology was not as advanced as 200 years later, and the ornamentation was very rich and required artistic work with decorations, which means a lot of time. Nevertheless, there were many swords produced then.

In fact, we know hundreds of swords from this period all over Europe. They have been well documented and cataloged. Books that we all know have been written about them. And yet I still come across articles or opinions that during this period there were very few swords in Europe and that they were not very usefull in battle...

It is simply an abuse and it is not true that swords were not used then or that they were not very effective weapons.
For me personally and also for many experts on the subject, it must be the result of ignorance.