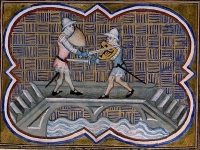 Nobleman Sword, second half of the 14th centurym inspired by several examples of original swords from European museums and historical sources.

Characteristics
The 14th-century nobleman's sword features a Type XIV Oakeshott blade, a slightly bent downward crossguard, and a massive round pommel. Both the sword and the belt scabbard are decorated with a lily motif in various medieval forms, which creates a stylistic coherence.
The pommel has inserts with a cross ending in the form of a lily. All fittings are made of a copper alloy and are patinated.

The handle and scabbard are oxblood and the belt is black.
The type of belt is one of the most widely used in the 14th century in Western Europe.

The stamp with the lily motif is hand-made and refers to the old technique of decorating sheaths. The motif of the braid surrounding the stamps was also taken from a medieval ornament.

One-handed swords of this type were widely used in the second half of the 14th century in almost all of Europe. We know them from many illustrations in illuminated manuscripts. They often have a leather guard.

This sword belongs to an interesting typological family with a characteristic shape of the handle and the blade, which combines the features of Types XIV and XII. This gives a weapon that is agile and well-balanced, perfect for fencing techniques.

'Sword of the nobleman' is a name that results from a slightly larger amount of decorations associated with the popular lily motif, which was perhaps most often used in medieval heraldry, alongside the eagle and the lion.

Such a sword could have belonged to a noble person, from France or England, someone who used it in combat and knew the craft of war, especially during the Hundred Years' War ...