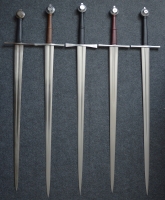 Historical research: The weight and other characteristics of the great swords of the Passau group, 14th century.
(in response to some of your questions and comments).

In European museums, we can find dozens of swords from the so-called Passau group. They were manufactured in German workshops from the 13th century on, and the most distinctive is certainly a special kind of great swords. They are characterized by high weight and large size. At the same time, they have a simple and classic typological structure.
The most distinctive features of the blades of the swords produced in the Passau workshops are:
- the sign of the Passauer wolf, inlaid on the blade (for the most of them)
- specific cross-section of the blade, most often with strongly marked planes of the octagonal cross-section with a wide and strong secondary bevel (for the most of them)
- Oakeshott blade types: XIIa, XIIIa, less often XVIa and XVIIIa, XX.

Today I would like to draw your attention to heavy weight of these great swords, the length of which was usually in the range of 120-135 cm and the weight often over 2000g.
Many times I read that such a weight is too much for a longsword. However, as the facts show, such heavy longswords were very popular in the 14th century. Perhaps many people, when speaking about a longsword, mean rather later swords from the 15th century, known from fencing treatises. Such swords were rarely heavier than 1500-1600g.
However, the earlier great Passau swords of the 14th century most often weighed much more and we are not talking about an isolated cases, but about a large group of swords as a whole.

Let's check out some original swords:

The other swords from this group found in other museums also weigh in the range of 1700-2200g.

Where does this weight come from?
This was the idea behind the construction of the blade, which was to be even more durable and effective against armor or chain mail. This is evidenced by the reinforced edge. The additional angle gives the edge a thickness, thereby making it stronger. The base thickness of the blade was 5-7mm mostly, sometimes a bit less or more. Such swords were large in size, full length 120-135cm. Always designed to be used with both hands. That needs a huge, solid and heavy pommel and guard to set the optimal balance.

Was it desirable and useful in combat?
Of course yes. This is evidenced by the number of original swords and their number in the manuscripts. It was a formidable and powerful weapon, at the same time very versatile. It is this type of sword that is the ancestor of the later longsword: lighter and more agile, with a blade even more adapted to stabbing and sophisticated fencing techniques.

As you can see, such heavy and large swords are no coincidence, no craftsman's experiment or the whim of a single mighty man. The average man can use such a sword efficiently and effectively. Of course, we can find much larger swords in various collections, but they will be only a single items: ceremonial or gift, not forming a typological or stylistic group of commonly used battle swords. That is very important.

It is also worth to say that not only Passau swords are such a heavy ones in this group. I included some few examples without a Passauer mark on the blade. However they are such close to them by their form and parameters, that I decided to include some few of them. Maybe also made in Passau or inspired by them? who knows.

It is very rare for me to see any of my modern swordmakers make blades like the ones described above.
For me personally, these are great and very important swords in history, I make them very often, trying to get to know and understand them.
I hope that many people can appreciate them today, because it is a large and important typological group of medieval swords.