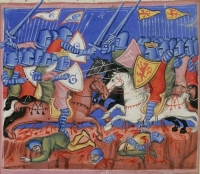 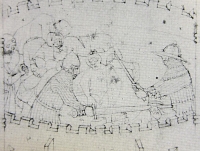 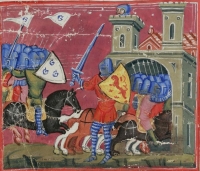 What is 'PROTECTOR Longsword Project'? What is it based on?
Specific type of long sword from the 14th century: characteristics, sources and inspirations.

The Protector Longsword is my personal original project, constantly improved through testing parameters and analysis of original swords.
My goal was to find the optimal longsword with the most universal properties for this kind of sword. Of course, my personal preferences played a leading role in this project. However, I really wanted the form of the sword to be simple and classic, typically combat and practical.
For many years I have tested different variants of parameters, I created 5 fully finished swords and about 10 others like this that I tested, reworked and used for intense training. I searched for parameters that are optimal.
This does not mean that I was looking for a 'perfect sword', because there is no such thing. It will always depend on many factors. However, I was looking for a sword that perfectly reflects a style of the specific group of longswords of the 14th century European knight and at the same time has very practical parameters.

Research and museum examples
You can see attached some 15 examples of original swords from European museums. Almost all of them are dated to 14th century, mostly 1300-1350. Each of them has different dimensions, a slightly different form. However, the general character, similar proportions, recurring types of the blade, pommel and guard, cause that we can include them in the described group of swords. This is not a huge group of swords, rather an advanced variation of the early longsword, yet complete in its evolutionary form. not so popular as type XIIa, XIIIa which appeared earlier and became commonplace.
I defined the average dimensions range, I selected the characteristic form of the elements and on this basis, after a long research, I created my design.

General characteristics
What caught my attention and made me sympathize with these swords was their classic, simple form and parameters, which suggest a very specialized weapon, intended for a skilled swordsman.
These are certainly not big, heavy, two-handed swords like those of the Passau group described earlier. The longest of the source swords are around 1230mm and weigh no more than 1600g. The shortest are about 1090mm.
They are characterized by a balance close to the guard, in the range 60-110mm. Thanks to this, the sword is agile, maneuverable and fast.
After analyzing many original examples, their parameters and sources, it can be concluded that such swords constitute a specific group of long swords, characterized by very good and versatile features.
Grip is not very long, mostly 160-180mm which results in keeping the hands close together but at the same time it enables very fast and strong blows. This is also an early version of a later longsword in the form and types we know from fencing treatises. By practicing with this sword, we can try to understand where the later types came from.

Blade type
There is a problem with classifying this type of blade. According to Oakeshott's typology, it is a variant of type XVIa or XVIIIa. However, in fact, each of these original swords has a slightly different blade. Many of them have a more pointed tip and most of them have a blade that tapers strongly towards the tip.
Fuller also varies in length, but is not longer than half the length of the blade. It is usually shorter and quite narrow. The rest of the blade has a clear ridge. This ensures a good stiffness of the blade, which in turn leads us to the conclusion that such a sword is adapted for effective thrusting as well.
It seems a logical conclusion that such swords could have appeared as early as the end of the 13th century, and they worked best at the 14th century.
Some versions of the original swords of this group had an octagonal cross section without a ridge. The whole idea of such a swords, however, seems very close to described above.

Handle
Taking into account such a classic and simple form of the whole sword, the most adequate handle will also be classic and simple. However, it must be very well shaped, the nuances that affect the handling are important.
I decided that a straight, slightly tapered grip would be the best solution. The black color also gives the whole a classic character, neutrality and historical compatibility with the sources.