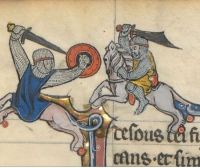 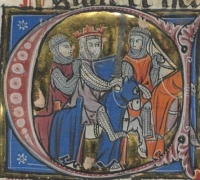 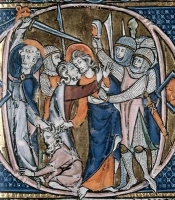 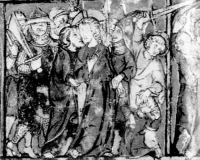 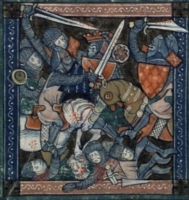 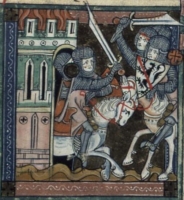 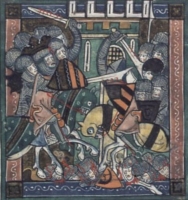 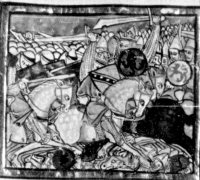 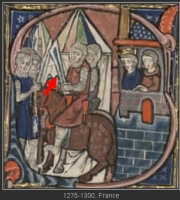 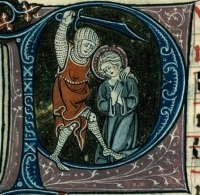 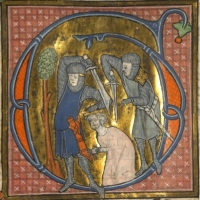 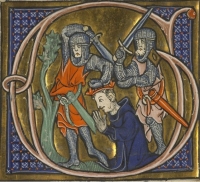 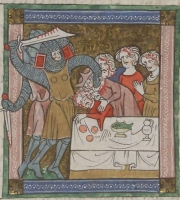 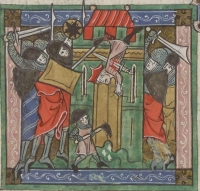 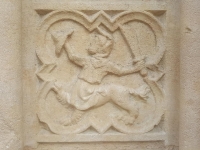 Original examples of this type in museums:

Type Characteristics
This type of single edged weapon has the hilt form as a classic swword of its period, symmetrical, no rivets. The cutting edge is on the concave side of the blade along its entire length, and the back side is partially sharpened, circa 1/3 of the blade length. Grip for one hand.
It is assumed to be a kind of alternative falchion design, an inverse version of type 3-3b or possibly a variant of type 1c (James Elmslie typology). Despite the fact that there are few representations of this type in art and only 2 roiginal examples, we find it in use for a fairly long period of over 100 years.

Combat Features
This particular type of falchion combines the features of a sword, ax, saber, and halberd.
It is considered a short-range weapon, very effective in close quarters, used as a knight's weapon.
The shape of the tip and the rigid structure ensured both a strong point hit, effective penetration through armor or a helmet. The reinforced spiky tip is deliberately reinforced for this purpose with a triangular cross-section.
It should be assumed that such a design could be a response to the progressive dissemination of plate armor.
This type of weapon has a sword hilt and the whole thing is similar in weight to an average one-handed sword. The difference, however, is in balance. Falchions of Type 2 are balanced more forward
than any sword which brings it closer to the balance of a light ax and makes the widest point of the blade hit really strong with minimum effort. 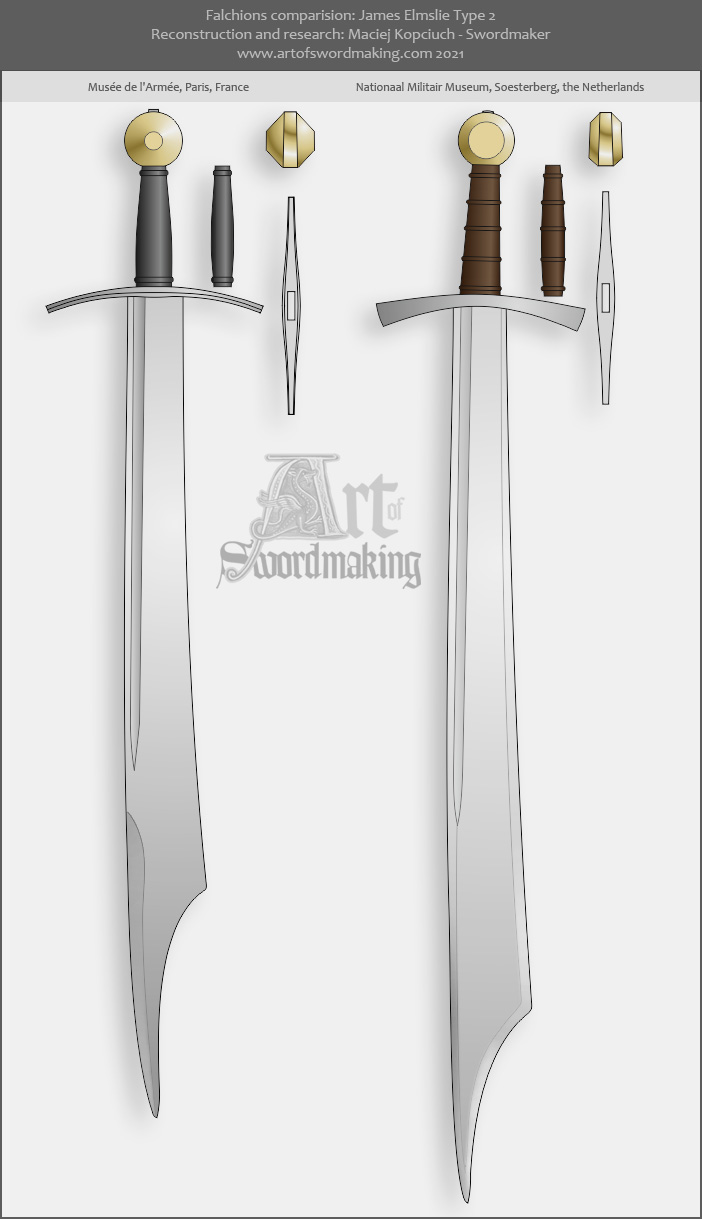 Both known original examples have brass pommel, both blades have fuller on one side of the blade only also very similar size and cross-section of the blade.

The main differences between them are showed on the diagram.
The example in Netherlands is a bit longer and seems to be a bit earlier, what we can conclude from the comparison of the pommel type. The whole hilt of the French example has clear typological features of the second half of the 14th century. It is also shorter, but a bit more elegant in form and lighter.
Despite these differences, both falchions are very similar representations of exactly the same type.

Similarities to a halberd
We can also note very interesting parallels with the popular type of halberd used during the 14th century. Both the shape and the concept of the blade cross-section are very similar, with the difference that the halberd blades were slightly larger in general, mostly 350-450mm long. It can be concluded that this design of the blade worked well on the battlefield, both for polearms and in the form of a one-handed falchion.

Of course, the idea of a broadening, single-edged blade is common to all types of falchions, being their major feature. However, adding a triangular spike is an interesting accessory that adds the ability to perform effective and deep thrusts.

Characteristic of the falchion type 2 is certainly the convex curvature of the back side of the blade, and this is a feature that distinguishes it from other types. Both known examples have a prominent point, which is also a distinguishing feature that was also used in the halberd blades. The stylistic evolution of halberds in the 15th and 16th centuries develops this concept, referring to triangular sections and stiff spikes. The form of the blade becomes short and some features of a blunt weapon are added to it. On the other hand, the evolution of falchions is towards heavy sabers and cutlasses. 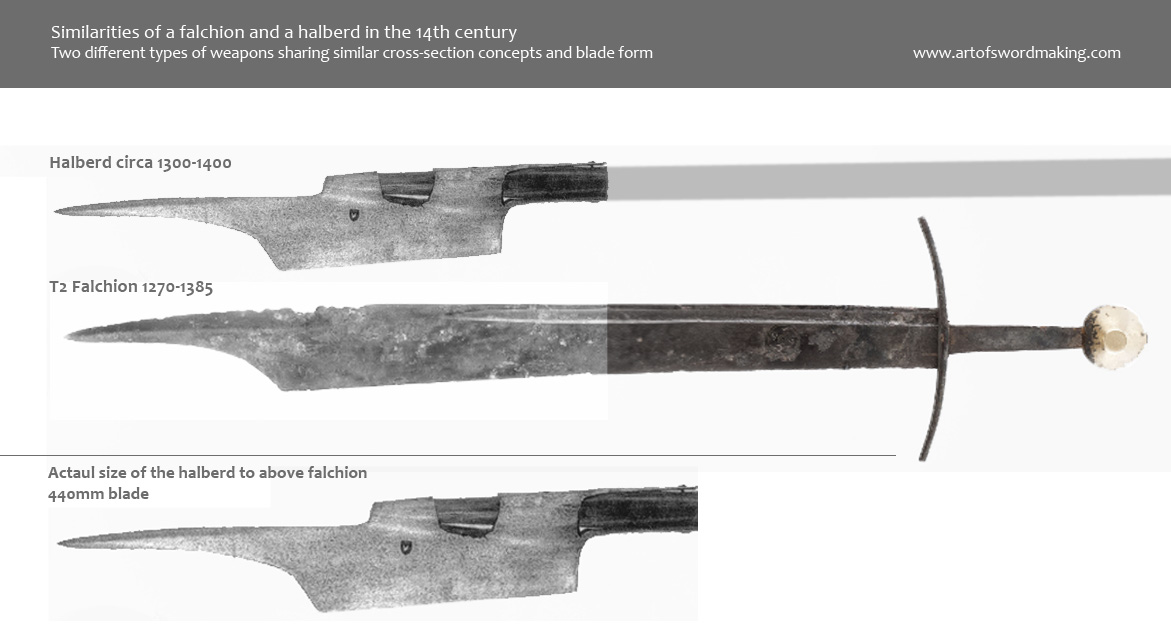 Another example of a very similar concept of blade shape is the Indonesian 'balato' swords used later. They have various blades, but the shape of some of them is almost identical to the medieval type 2 cleaver.

We can therefore conclude that the effectiveness of this form of the blade was appreciated in various parts of the world and it is not an extremely rare concept.