Sword description:
This sword was designed by me, according to historical sources from years 1370-1400, mostly German.
the sword is one handed weapon, fully functional. The sword can be used with both hands also - just like we can see on manuscripts, with second hand on the pommel.

The sword is not light but well balanced and very powerfull for cutting. The blade is stiff for strong thrusting also.
It is something between Types XII - XIV and maybe also XVI. The form is based on museum swords, mostly German, and many manuscripts sources.

Scabbard description:
Scabbrd style I called Type 'S' is well known method which we can see in the sources from 11th to
the end of 14th century - very common and practical style of scabbard and belt. The scabbard core is made with wood, linen cover and calfskin. Leather was colored and antiqued. It is importand thing that all decorations here are hand carved - even the stamps were first hand carverd in wood.
The colors are also hand painted - just like in medieval art. But decorated scabbards were not very common - mostly they were using simple, ordinary scabbards - but we know that some unique weapons had exceptional sheath, mostly highly decorated. This is one of those - and that was the intention...
St Georgius is the person well known and famous in Middle Ages - we can see him on the shields, paintings, weapons - as a patron and protector of the knights.
Actually this particular type of belt dissapear at the and of 14thC. but I have decided to use it - for the contrast and to note that this is battle weapon - not ceremonial.

Inspirations:
- illustrations from Belgium, France and German manuscripts, end of 14thC.
- St Georges and the Dragon sculpture in alabaster, c.1400, artist unknown > St George details
- Sforza Triptich by Van Der Veyden, c. 1400 > the dragon 'anatomy' is from this painting
- the case / sheath of St Maurice sword from Turin, c. 1430 was inspiration for the main
composition and color style. actually many times unique swords were received special sheath some
later time - like St Maurice and some royal swords.

Inscription:
On the scabbard and the sword fullers we can see inscription - fragment of Psalm 50.
We can find also on other swords fragments of Psalms or invocations.
This text in latin is:
'Cor mundum crea in me, Deus:
et spiritum rectum innova in visceribus meis.' ...
which means:
'Create, O God, in me a clean heart
and renew in my chest invincible spirit!'... 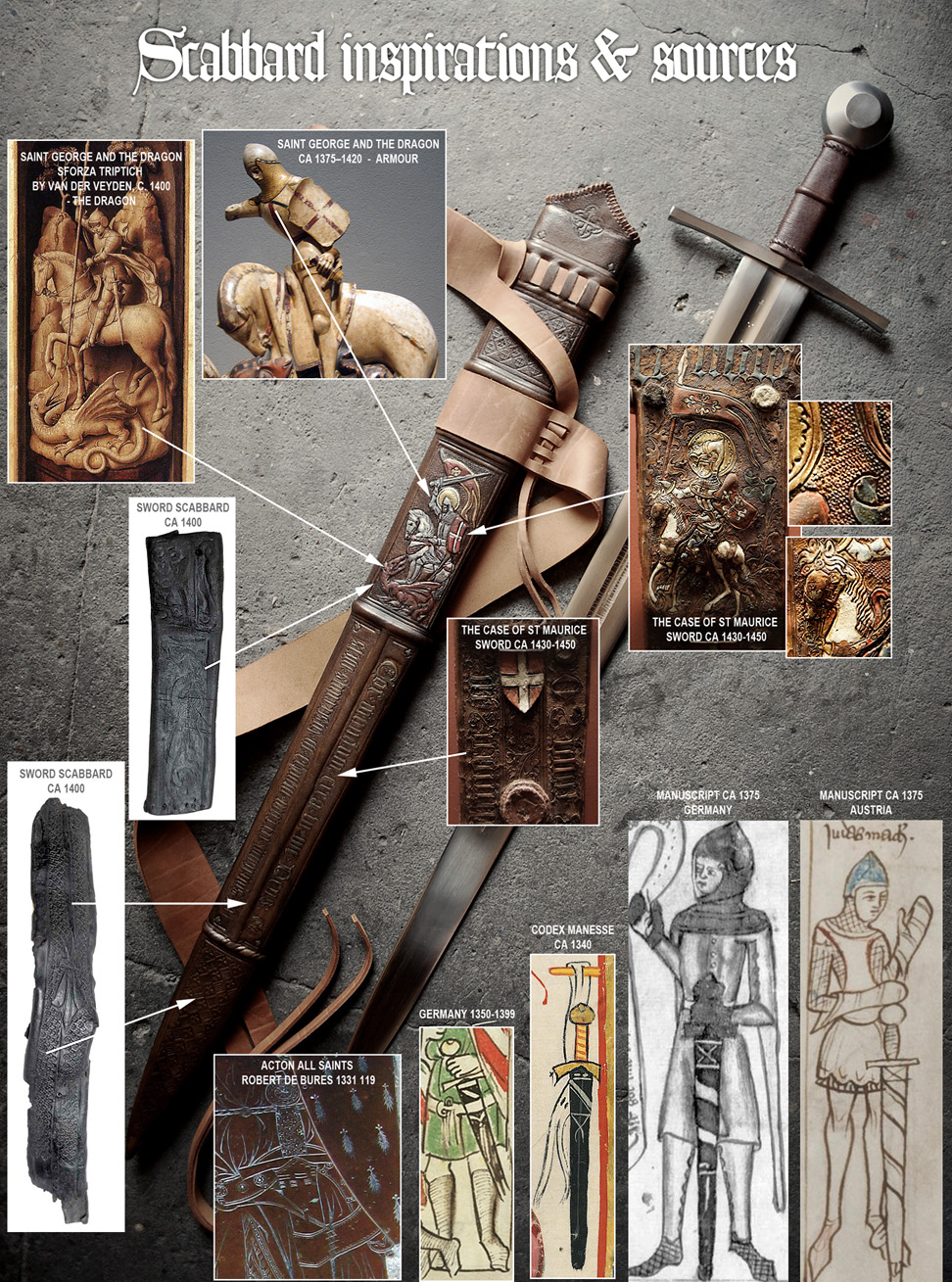