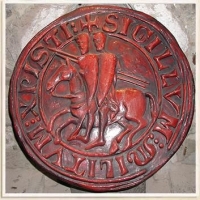 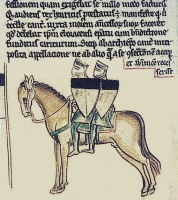 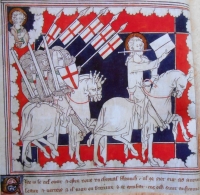 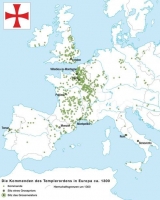 Over the years, I have received many inquiries about the swords the Templars used. It would be easiest to say that they used conventional, common swords like all other knights during this period. Although I know many of you expect a different answer...
It has to do with how we see the Templar Order today: full of secrets, great warriors, cursed and betrayed, a lot of legends and myths have arisen around them throughout history.

Templar Order - basic information
The period of the Templars activity falls on the years 1119-1312. The full name is: Order of Solomon's Temple Order of Christ (Latin: Pauperes commilitones Christi Templique Salomonici).
Their motto: Non nobis, Domine, non nobis, sed Nomini tuo da gloriam
(English: Not for us, My Lord, not for us, but to your Name give the glory).
We all know their symbol: red cross on the white field.
Hundreds of publications have been written about them, including film documents and conspiracy theories.
We're not going to cover all of this here, we're just going to focus on the swords they used.

Swords
193 years of the Order's existence fall in a turbulent and war-filled period. The Order actively participated in the Crusades, fighting not only in the Holy Land but also in other areas of Europe. Knights most often came from many countries, mainly France, Germany, but also from Italy and England. Of course, they used swords typical of that period, proven and effective in combat. One-handed ones, then also long swords, many types. Let us not be influenced by the crosses placed on them, as it was common throughout the Middle Ages. This is by no means an indication that the sword belonged to the Templar, nor does it preclude it.
Also, when it comes to the type of troops of the order, one can speak of similar types as in any other army or knightly order.
It is safe to assume that any sword from the period c. 1100-1300 could have belonged to the knight Templar. At the same time, no symbol or inscription has been found to suggest that this particular sword belonged to the Templar.
If anyone associates any particular sword with the Templars, it is only a hypothesis, possibly resulting from the place where the archaeological deposit was found and located, or if it results from the context of the find, e.g. other artifacts found at the same site, in the same layer. Even then, such a sword will not differ in any particular way from other swords of the period.

Decorating and The Rule
We often hear that a rule of the Templar Order forbade the decoration of weapons. However, there is nothing of the sort in the original record, only the dress code.

Let's check the text of the rule:
'17. We command all brothers' habits to be always one color, that is white, black or brown. We allow all brother knights to wear white coats in winter and summer if possible; and no one who is not one of the Knights of Christ mentioned. it is allowed to have a white cloak so that those who have forsaken life in darkness may recognize each other as reconciled with their Creator by the sign of white habits, which means nobility and complete purity. , he will not be able to reach eternal rest or see God, as the apostle said, Pacem sectamini cum omnibus et castimoniam sine qua nemo Deum videbit. God '.

18. However, these garments should be UNADORNED and without any sign of pride. We therefore command that no brother have a scrap of fur on his clothes or anything else that is for use in the body, not even a blanket, unless it is lamb's or sheep's wool. We command everyone to have the same, so that everyone can dress and undress, and put on and take off shoes without any problems. The cloak or the one who takes his place should carefully consider and take care of all the above-mentioned things in order to receive a reward from God and that the eyes of the jealous and slanderers may not notice that the garments are too long or too short; but he should separate them so that they fit who must wear them, according to their size.'

So, the only mention about it is:' ...these garments should be unadorned'. No mention about the weapon. This is about clothes. However, we can obviously also interpret the entire text as a recommendation for modesty and especially not decorating in the old pagan way as ornaments.
In all certainty, the sign of the Cross or the order`s signs or inscriptions were not prohibited in any way. This is not in the record, and it would be rather strange in this era to forbid it. We need to understand what for THEM, THEN was 'decorating' and what it is for us today.

Modern approach
Today, many times some people want the sword or scabbard to be clearly associated with the order, most often as a tribute or sympathy for the Templars. Personally, I do not see anything inappropriate or strange about it, if, of course, we do it in a deliberate manner, in accordance with the style of the relevant period and modest enough to maintain the character of the order`s rule.
Unfortunately, nowadays we find many mass-produced 'swords' which are called Templar swords, which, however, are pure fantasy, both typologically and historically. They are full of fancy ornaments and symbolism, mostly taken from later sources. Unfortunately, even in the movies we see such design, which certainly disqualifies these productions.
I highly recommend to learn the history of the Templar Order and the history of the Middle Ages in general in order to be more aware of the weapons in this period.

Conclusion
There are no particular details, type of swords, other weapons and armor, that would be characteristic only for the Templars and in any way indicate that the item is related to the Templars. Only the coat and the banner which were white and have a red isosceles cross were to signify belonging to the order.

Part II of the article will show the sword types used in the Templar period and some museum examples with description.

'The Knight of Christ is a crusader who has a double battle:
with flesh and blood and the powers of hell [...]. He goes boldly forward,
vigilantly looking left and right. He put chain mail on his breast,
and he covered his soul with the breastplate of faith. With this double armor, he no longer fears
neither man nor Satan. Go then, knights, go ahead boldly, go
with a fearless heart, drive away all enemies of the Cross of Christ!
And have this certainty that neither death nor life will separate you from Christ's
love. [...]. How glorious is the knight's return after a victorious battle!
And how blessed his martyr's death in battle.'